How to Handle Negative Feedback as a Leader

Most leaders deliver feedback on a regular basis. Feedback from the boss can be potentially rewarding, validating and motivating.

But what if you’re the boss — getting feedback from your boss?

Leaders are not immune to feeling challenged when they are on the receiving end of negative feedback.

One of the reasons that it can be so difficult for leaders to digest negative feedback, according to Nancy Scheel, an executive coach who runs Jody Michael Associates’ Atlanta office, is lack of relevant or trusted support in its wake.

“When it comes to addressing critical feedback, most leaders find their company’s leadership training resources to be lacking the depth and specificity needed for the nuance of their situation,” Nancy explains. “In addition, leaders are typically hesitant to reveal the feedback with others.”

“As a result, leaders often find few guideposts for processing the negative feedback — especially if their own boss is not inclined to provide much support around the issue.”

Take the case of William, recently promoted into a vice president role at a technology company. William was caught completely off guard when Suzanne, an EVP, called him into her office to deliver negative feedback around his performance.

Meticulous in his own work, he expected the same level of quality from his team members. He worked long hours, ensuring that client deadlines were met — even if that meant doing some of the last-minute production tasks himself. Where is she going with this, he thought?

Suzanne went on to say that, while the company admired William’s commitment, they were concerned about his tendency to “get stuck in the weeds.” His position required a higher degree of strategic thinking than he was demonstrating. And it had cost the company more than one missed opportunity.

Feeling more than a little offended, William was at a loss for words. How could someone put their heart and soul into their job, their team and their company — and still be seen as falling short of expectations?

Negative feedback: No one particularly enjoys receiving it. Some people don’t even see it coming. And the majority have no idea how to handle it.

SO YOU RECEIVED NEGATIVE FEEDBACK. NOW WHAT?

Feedback can take on a power of its own — that is, if you let it.

Nancy finds that executive coaching clients who successfully work through negative feedback usually look back on it as a tool that encouraged their growth, both personally and professionally.

As she explains, there are five “phases” involved in processing negative feedback. 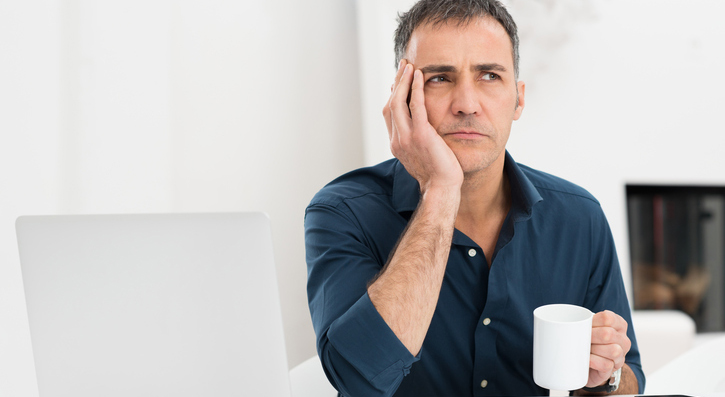 Upon hearing Suzanne’s feedback, William felt a variety of powerful emotions, from anger (“How dare she say that I don’t see the big picture!”) to fear (“Is this going to jeopardize my bonus?”) — and many in between.

“It’s natural to question your capabilities when you’re on the receiving end of negative feedback,” Nancy says. “Your self-confidence can take a serious dive as your inner critic goes into overdrive.”

Once you begin focusing on thoughts that create nonproductive moods, from resentment to anger, frustration, fear and others, you have succumbed to volatile emotional territory and immediately jeopardize your leadership capacity.

Nancy recommends taking a moment to parse your emotions. Take a breath — and then another one.

Examine the thoughts triggering your emotional state. Consider the noise in your mind (“This isn’t fair” … “She’s a jerk” … “I’m not good enough/I’m going to lose my job!”) and reflect on how you may be adding more to the situation than what’s actually there. Taking control of your emotions will allow you to switch from reaction to response. Once you get your emotions in check, you make space to objectively process the content of the feedback. Asking yourself, “Have I heard any of this before?” will allow you to identify patterns and potentially reveal blind spots.

Many people get bogged down in weighing the validity of the feedback, according to Nancy.

“It’s actually far more helpful to consider when and how this might be true rather than if it is true,” she says. “At this point, you take ownership of your attitudes, behaviors and results, despite how you feel hearing about them.”

3. Soliciting Input From Others

The best way to determine how others perceive you is to ask, particularly people: a) who know you well and b) whom you highly trust.

If you’re hesitant to ask for support, examine the assumptions you might be making about how others will hear your request or how you assume you’ll be judged as a result. You might be surprised to find that when requests are clear and targeted, people are generally very responsive — they appreciate being asked, and are likely to try to help. “The point of these conversations is not to prove or disprove the feedback, but rather to open the door to hearing constructive comments around the feedback,” Nancy explains.

This phase allows you to incorporate the input and insights you’ve gained into action.

The first step is to make a commitment to yourself: “This is important; therefore, I am going to work on it.”

Be sure to form this commitment in a positive light, focusing on growth, change, value and opportunity — rather than coming at it from a place of fear or doubt (as in, “If I don’t fix this, I’m sure they’ll fire me.”).

Determining how you’re going to work on it is where many stumble. Explore all possible resources; perhaps you can enlist the support of a trusted colleague or supervisor, attend a class or workshop, or work with an executive coach.

As you begin to make some changes, start small. Ask for open, honest feedback along the way — and listen without being defensive. Continue to make adjustments.

It’s important to identify — and understand — everyone’s expectations, Nancy cautions. “There is often a fine line between urgency and patience when it comes to results.

“While sustainable change takes time, and steady progress is sometimes enough, a company’s willingness to wait generally depends on the nature of the issue.”

Just as the commitment you make to yourself should be positively grounded, so should the feedback you give yourself along the way.

Progress rarely happens in a straight line. If you slip back into old behaviors, recognize it, correct your course — and continue to move forward.

5. Looping Back to the Source

Three weeks after his conversation with Suzanne, William requested a follow-up meeting.

In an effort to “step out of the weeds,” William had begun delegating more tasks to his direct reports and assigning mid-project deadlines to alleviate last-minute emergencies. As a result, he freed up time that he would use going forward to stay on top of industry and market trends, cultivate collaborative partnerships with other department leaders and proactively set relevant strategic goals.

By checking back with Suzanne, William was able to get a sense of how well she felt he had addressed the issue. She acknowledged progress in the right direction and asked that he check in again in two weeks.

Make no mistake about it: You are being watched. At this juncture, your boss will likely be assessing your attitudes, efforts and results in response to the negative feedback.

But knowing that you’re being watched doesn’t mean you have to feel intimidated. In fact, you should see it as an opportunity. Embrace the visibility, using it as an opportunity not only for realignment, but also for personal and professional growth.